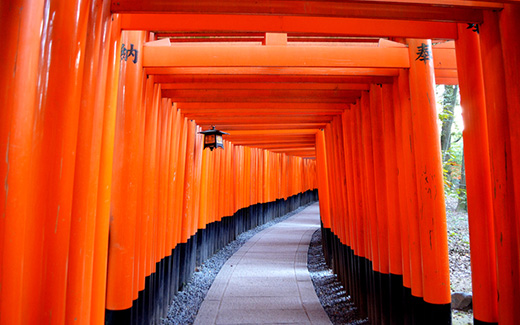 The Fushimi Inari Taisha Shrine is famous as one of the oldest in Japan, and is dedicated to the god of rice and sake. The path approaching the shrine features a tunnel of over 10,000 vermilion torii gates that winds up Mt. Inari. The forest is dotted with five shrines, as well as numerous stone statues of divine messenger foxes, defining symbols of Shintoism.
The beautiful Inari mountain path that connects Fushimi Inari is the perfect place for a stroll. Climb the beautiful torii lined path for a view out over Kyoto - seen from the summit, the center of the city is a breathtaking sight. You can also enjoy a delicious bowl of Kitsune Udon noodles at restaurants along the path. 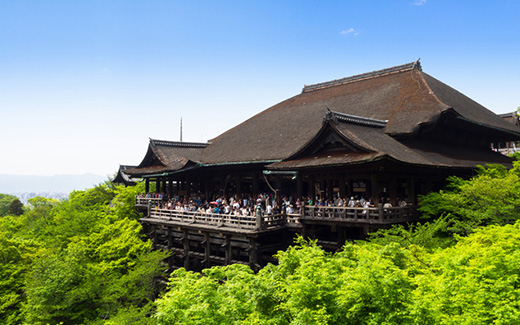 Kiyomizu-dera Temple is counted among the world's heritage sites and is a key point on the Kyoto tourist trail. Nighttime visits and illuminations help draw huge numbers of visitors all year round.
It was built in 798 by Sakanoue no Tamuramaro, shogun under Emperor Kammu. The present building is a 1663 reconstruction by Tokugawa Iemitsu. The principal image of the temple is the statue of the 11-headed, 42-armed Senju Kannon which is said to bless people with worldly benefits. It differs from other Senju Kannon statues in that the arms on both sides are raised up high to receive a small statue of a "kebutsu", transformed Buddha, in a pose quite unique to Kiyomizu-dera Temple. This particular Kannon has come to be known as the Kiyomizu-style Kannon. 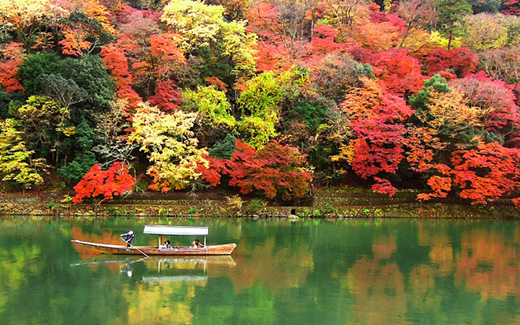 About 60 minutes by train From Ogoto-onsen station

Arashiyama is one of Kyoto's foremost sightseeing areas, and is popular for its cherry blossoms and autumn leaves. The whole area around Togetsukyo Bridge is popularly known as Arashiyama, but in fact the name comes from a 375 m high mountain located south of the Oi River. Togetsukyo (literally, "moon crossing") Bridge over the Oi River is said to have been given its name by Emperor Kameyama because of the way the moon appears to pass over the bridge. The area is dotted with major Kyoto sightseeing spots, such as the world heritage site Tenryu-ji Temple, and welcomes large numbers of tourists. 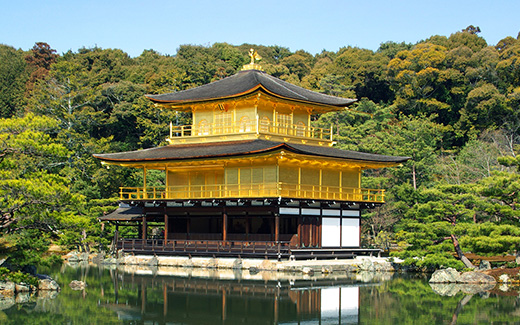 About 50 minutes by train From Ogoto-onsen station

Officially named Rokuon-ji Temple, it is one of the sub-temples of Shokoku-ji Temple. It is commonly known as Kinkaku-ji Temple (the temple of the golden pavillion) after its particularly famous gold reliquary hall. Kinkaku-ji Temple was originally rebuilt as a mountain villa called Kitayama-dono by Ashikaga Yoshimitsu, the third shogun of the Muromachi shogunate government, after he had taken possession of the Kamakura period noble Saionji Kintsune's vacation house.
The gardens and architecture around the golden pavilion are said to represent Sukhavati, or ultimate bliss in this world, and were visited by Emperor Gokomatsu, the father of the Zen master Ikkyu. They also served as the setting for the growth in trade with China at a time whose culture is now referred to as "Kitayama culture". Yoshimitsu's will instructed that the building be made into a temple, and after his death, Muso Kokushi converted it accordingly. Two characters from Yoshimitsu's posthumous Buddhist name Rokuonindono were taken to form the new temple's name, Rokuon-ji. 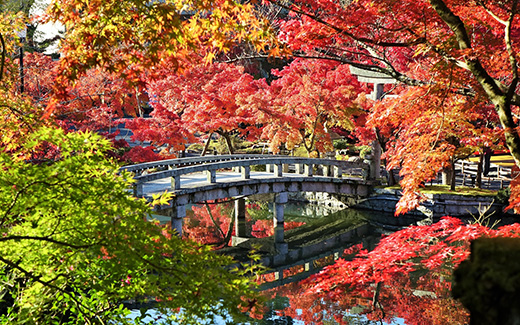 About 60 minutes by train From Ogoto-onsen station

Eikando (official name Zenrin-ji Temple) is the head temple of the Seizan-Zenrin-ji branch of the Pure Land sect and is famous for its Amida Buddha statue cast looking over its shoulder, and for its autumn leaves. It was founded in 853 as a Shingon sect hall by Shinsho, a disciple of Kukai, but in the latter half of the 11th century, Yokan (from whence the name Eikando derives) became chief priest and the temple became part of the Pure Land sect. The temple possesses a large number of Buddhist paintings dating since the Kamakura period (1185-1333), including the Yamagoshi Amida zu which is a national treasure.
Eikando is also known as a good site for autumn leaves, where nearly 3000 maple trees take on beautiful colors. From November to early December, illuminations are put on during the autumn temple treasure exhibition period. Between 17:30 and 21:00, the Amida-do, Gasen-do, and the garden are lit up with fantastical illuminations. Last admissions 30 minutes before closing. 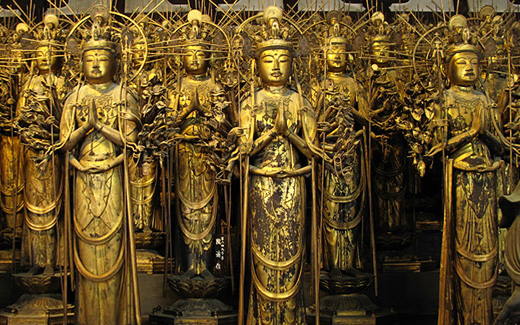 Sanjusangendo Temple was constructed by Emperor Goshirakawa as an imperial palace in the Heian period, and has long been a spiritual home for Japanese people. Recently, large numbers of tourists have begun to visit from all over the world.
The sight that captivates visitors at the Sanjusangendo Temple is the 1001 Senju Kannon statues standing behind the 28 statues of guardian deities. The highlight of the scene is the thousand Kannon statues precisely positioned on raked platforms in roughly 10 rows. These standing Senju Kannon statues each feature 11 faces above their heads and 40 arms raised aloft on each side. Despite their sheer number, the fact that no two Kannons' faces are the same is quite unique. The 1001 standing statues are arranged in a calculated fashion so that each one of them can be admired easily. 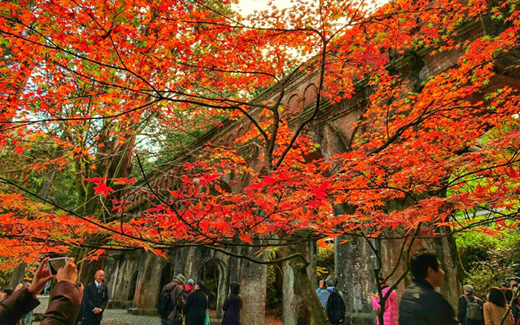 About 35 minutes by train From Ogoto-onsen station

Built as a Rinzai sect temple in the Muromachi period, Nanzen-ji Temple is the headquarters of the sect of the same name. Large numbers of visitors come to the temple particularly during the cherry blossom and autumn leaves seasons which are well-known for their beauty.
Through the temple grounds runs a thick brick aqueduct, constructed during the Meiji period in order to pipe water to Kyoto from Lake Biwa. Melting into the peaceful surrounding scenery of Higashiyama, this arch-shaped bridge style structure lends the area a wonderful air of mystery. 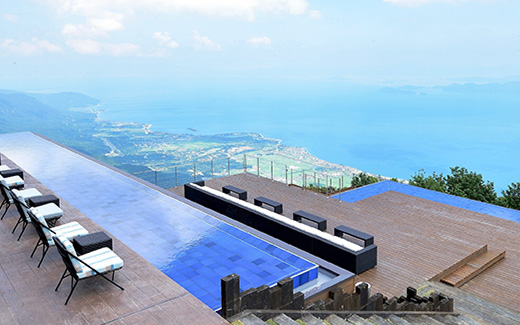 About 30 minutes by car From Yumotokan

5 minutes from the mountain foot by ropeway, Biwako Valley is a resort that spans from Mt. Uchimi (elevation 1,108 m) to Mt. Horai (elevation 1,174 m). There are two unique terraces on the mountaintop. From the Grand Terrace, you can see a magnificent view looking down on Lake Biwa from the sky. From the North Terrace, you can see the beautiful landscape of Lake Biwa and the mountains. Both are scenic views that attract visitors from all over the world. 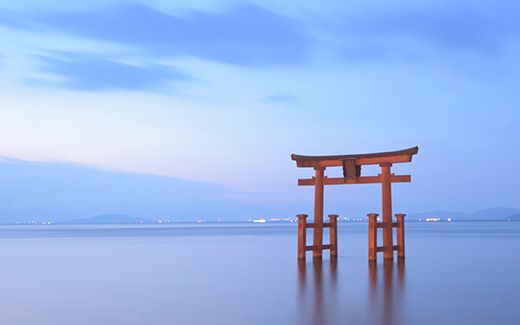 About 30 minutes by car From Yumotokan

Shirahige-jinja Shrine looks impressive, with its vermilion torii gate rising from Lake Biwa, and is known for housing the god of long life. The deity is also revered as a "god of guidance" for all human and work related activities, such as those of matchmaking, conception, good fortune, school achievement, traffic safety, and travel safety. 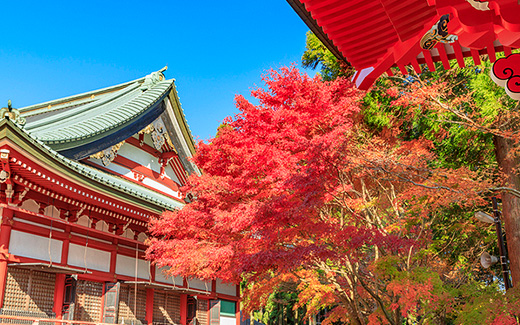 Enryakuji Temple is a World Heritage Site nestled in a beautiful natural environment. At an elevation of 800 m, it sits on a mountain overlooking Lake Biwa, Japan's largest lake. This mystical place that has over 1,200 years of history is famous as a "power spot." The large grounds hold around 150 temple buildings, which many visitors from around the world come to pray at. 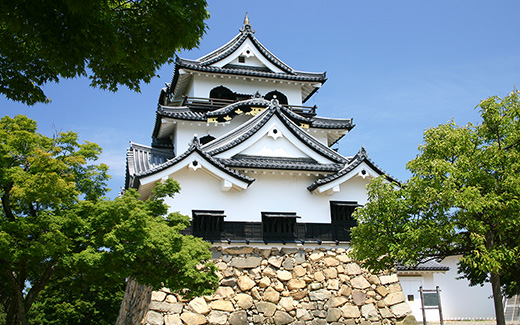